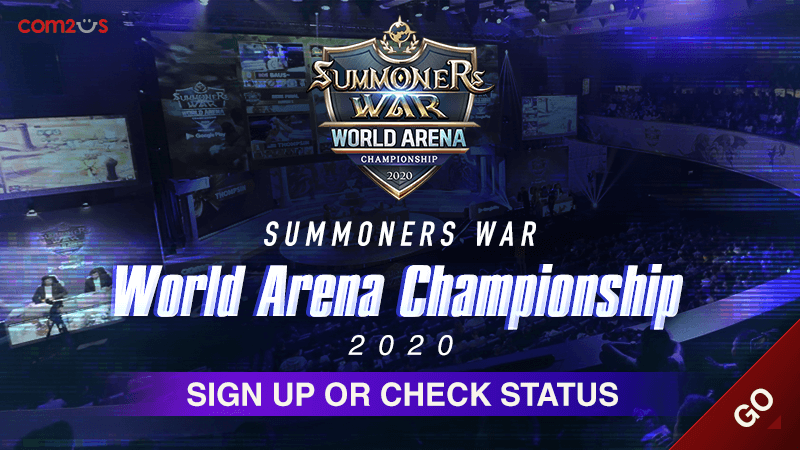 Who will become the best Summoner of 2020?
Please read below for more information on the schedule and registration.

You can also learn more about the SWC via Summoners War official website.
Go to the Official Website (www.summonerswar.com/swc2020)
( ↑ Tap the above link to be redirected to the tournament notification page.)

Before going into the details, we would like to first talk about what has changed from last year's SWC2019.

Due to COVID-19, we have decided to hold all matches of the SWC2020 as crowd-less and online. This decision has been made for the safety of all Summoners, so we ask for your kind understanding.

Also, this year’s preliminary and group stages will be integrated. The double elimination method will be applied from the preliminary to provide fairer match opportunities.
[Read the SWC2020 Tournament Pre-Notice]

Player Application Period
- When the page opens on Jun. 21st until Jul. 6th 12am PDT
※ Please enter the game, tap the EVENT button to access the registration page.

Tournament Schedule and Method
■ Preliminary Participant Selection (Planned in mid-July)
Among the applicants, preliminary participants will be selected based on their records of the World Arena Season 12 and 13.
* The number of qualifiers of each region is different.
↓
■ Preliminary Matches (Planned in late-August - September)
※ In this year's SWC2020, the preliminary and group stages will be integrated.
※ All of preliminary matches will be held as Best of Three.

* Europe and Americas Preliminary
- Based on the records of Season 12 and 13, 16 players will be selected as the preliminary participants regardless of the countries.

* Asia-Pacific Preliminary
- The number of players who will advance to the Asia-Pacific Cup from each country's preliminary is as follows.

※ In this year, applications in Southeast Asia and other regions will be submitted separately but the preliminary will be held together.

(2) The players who lost in the first day's match will play the second day's loser match, and the final winner of the loser match will
advance to the Regional Cup.
↓
■ Regionals
Americas Cup (Oct. 24th), Asia-Pacific Cup (Oct. 31st), Europe Cup (Nov. 7th) (Scheduled and the
dates are shown in local time)
: Single elimination tournament
: Matches will be played as Best of Three. From semi-finals, matches will be played as Best of Five.

Eight Summoners advanced from regional cups will compete in the World Finals in late November!

Detailed information regarding each regional preliminary will be notified via separate notice.

You can watch all of SWC2020 matches from our Summoners War Esports YouTube channel.
★ Subscribe to the channel now