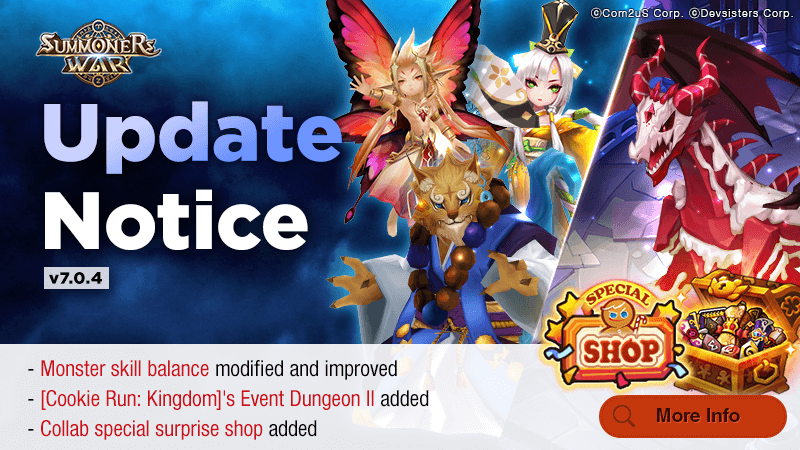 Summoners War v7.0.4 has been updated. Please check below for details!

* The actual update will be applied through an auto update during the maintenance. (Android/iOS)

* Details can be checked through the maintenance notice. 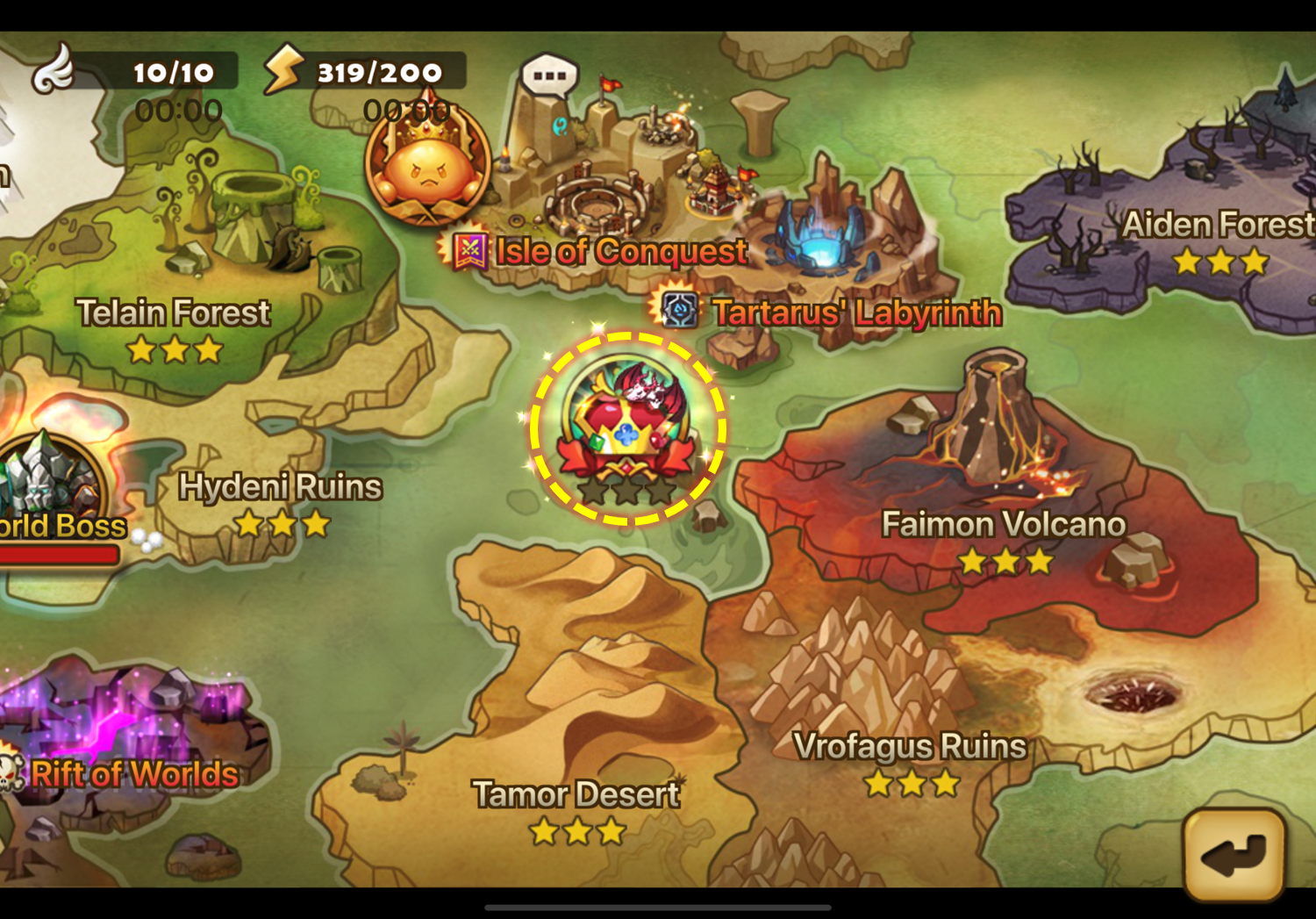 * Please note that the opening of [[Cookie Run: Kingdom]'s Event Dungeon II], which was notified in the Collab Special Event Part 4, will be delayed due to some market update delays. We will notify you once again when the dungeon is open.​

The goals of [Cookie Run: Kingdom]'s Event Dungeon Ⅱ change every week. Summoners can challenge the goal of the corresponding week from Monday to Sunday at midnight. 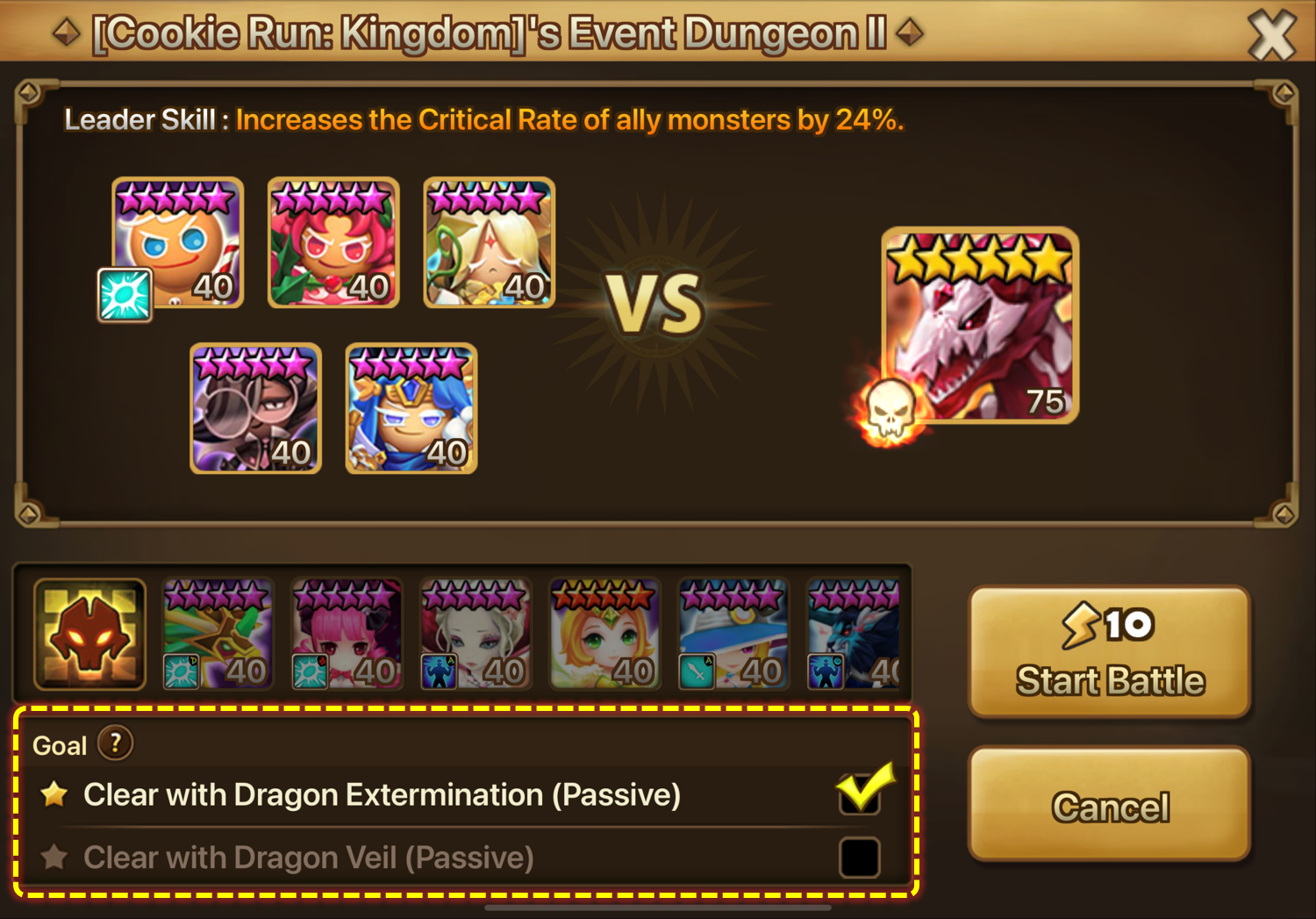 : In the dungeon, Summoners can challenge goals regarding Red Velvet Dragon's passive skills.

2 additional passive skills other than the basic skills of the boss can be selected as a goal in the battle preparation screen.

: Boss' 2 passive skills change every week, and you can obtain additional rewards according to your progress. (You can obtain rewards for each week's goal once)

▶ The icons of beneficial & harmful effects are now displayed more clearly in [World Arena/Arena/Trial of Ascension]. 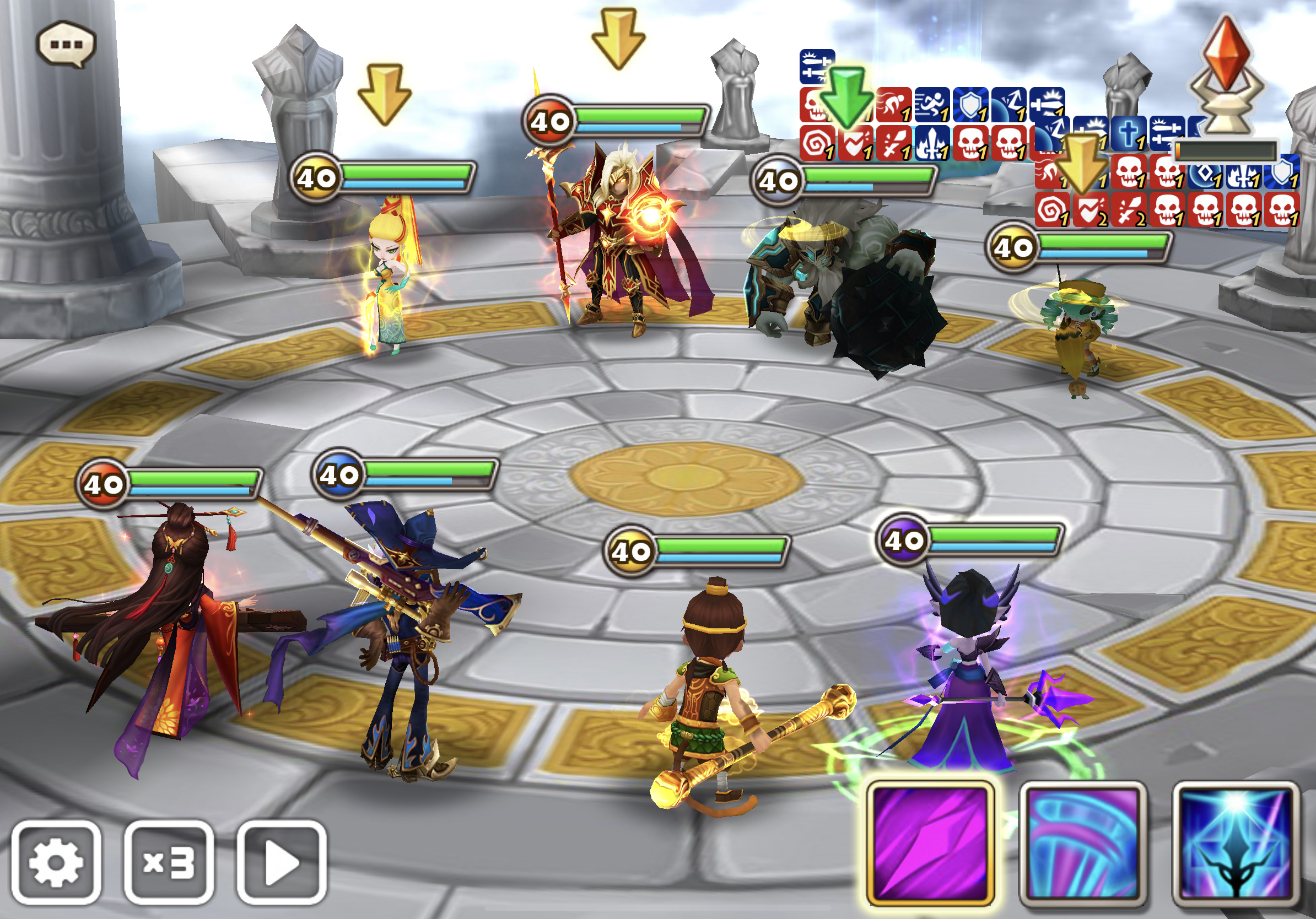 : Icon size has been adjusted and the icons are now displayed in 3 rows, consisting of 7 icons in each row instead of being displayed in only 1 row to fix an issue where the icons would go out of the screen in certain resolutions.

▶ An icon that redirects you to a mini shop where you can purchase [Energy/Arena Invitation/Mana Stone/Crystal] displayed on the top-right of the island has been added. (The icon shows up by tapping the currency) 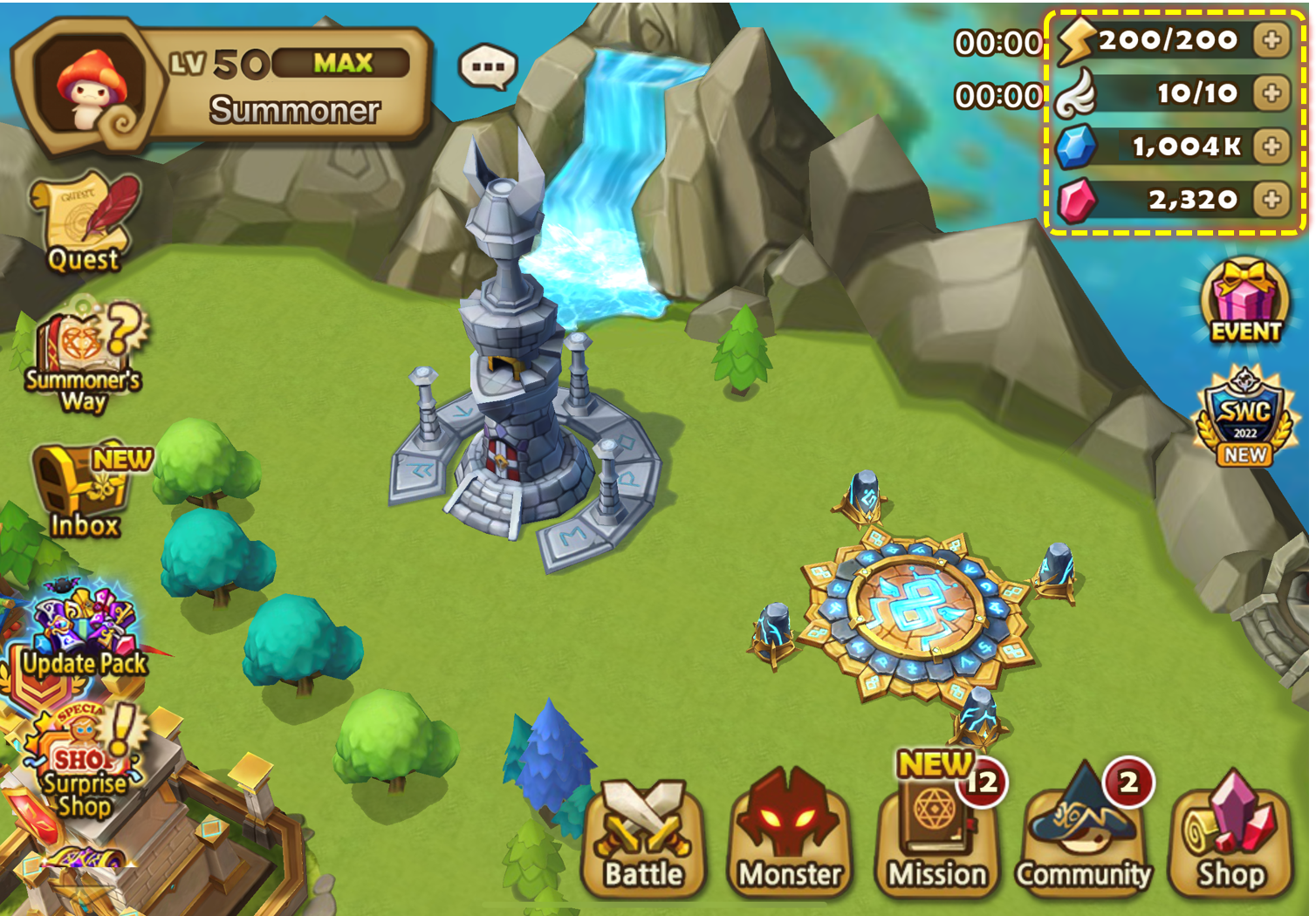 ▶ [Craft Building] A menu that shows the list of craftable items has been added to the detailed info screen of the material item.

▶ [Siege Battle] The special rules settings of the battle test have been removed.

▶ [Guild Tower] building has been improved.

- A notice that displays the no. of battles that haven't been achieved in the corresponding week of [Monster Subjugation] will be added.

- The notice icon of the Guild Tower building is now more noticeable.

▶ [Shop > Efficient] Collab Special! <Surprise Shop> will be open. Check out the items with special price! 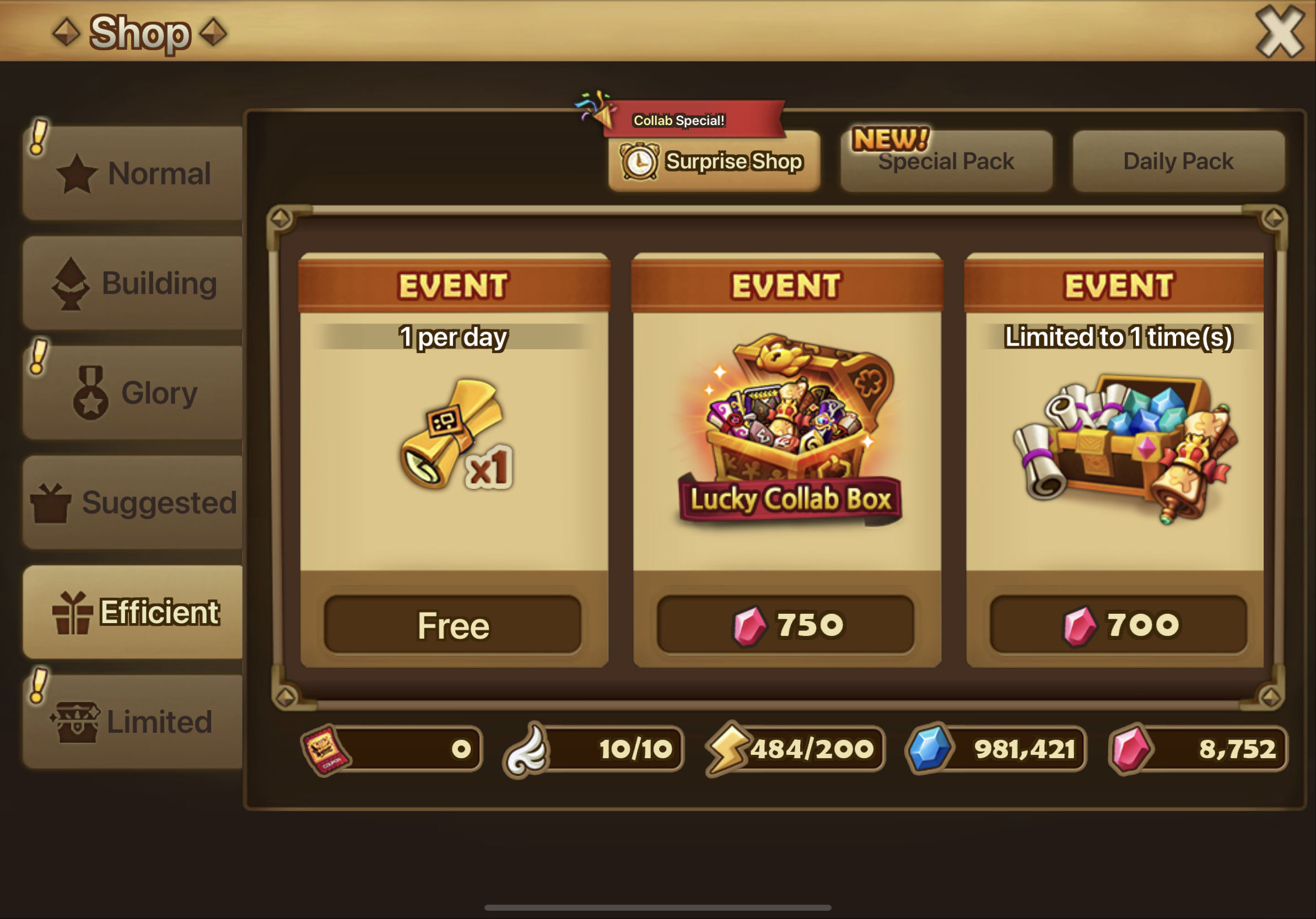 - Check out the item component below.

* The free Mystical Scroll reward refreshes at 12am every day. (Server time) 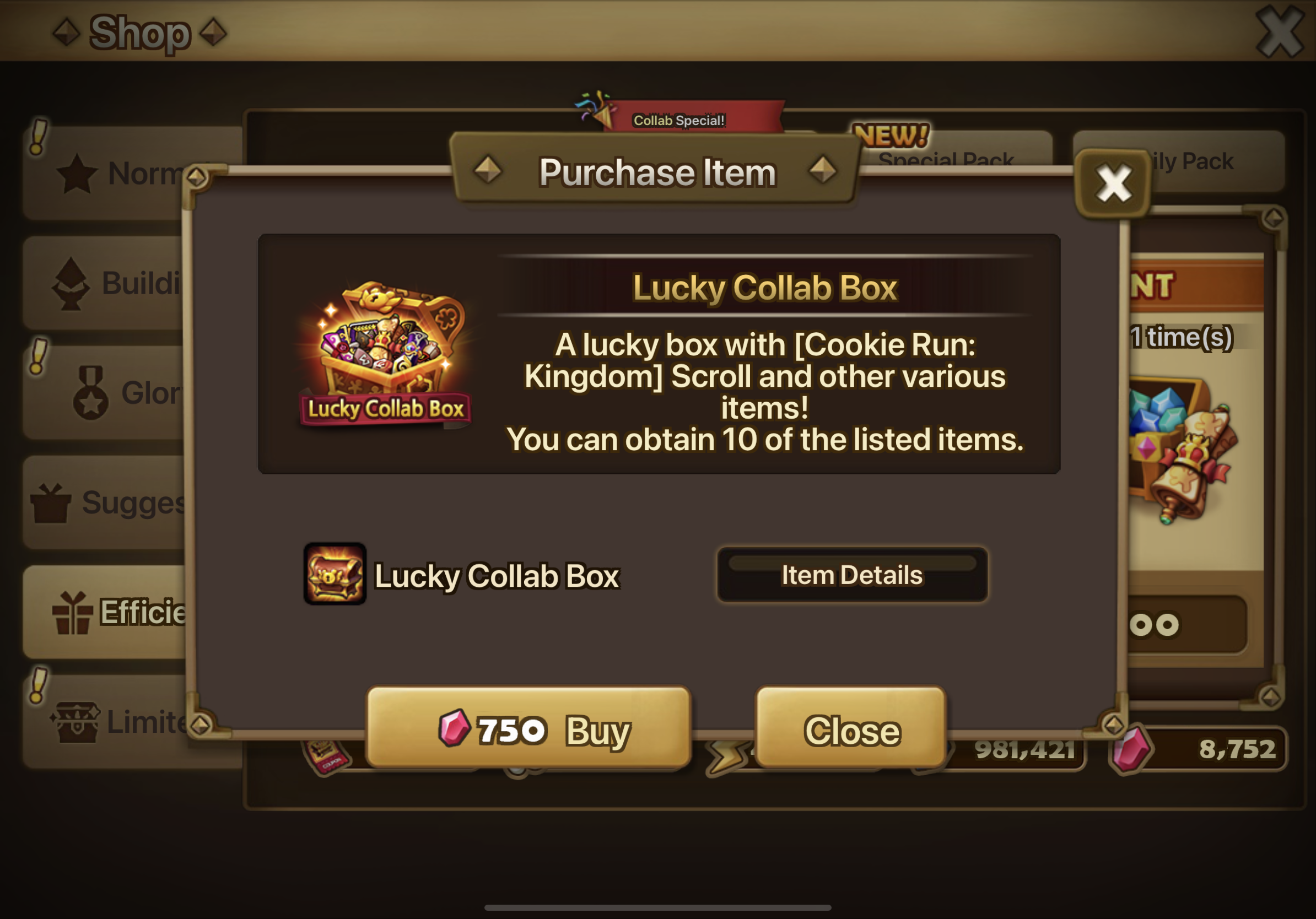 : Lucky Collab Box consists of various items including scrolls such as [Cookie Run: Kingdom] Scroll, Runes, Grindstones, Artifacts, and more. You can obtain 10 of the listed items by purchasing Lucky Collab Box once. Check out the [Component List] for the items and rates in the item screen.

▶ The symbol image depicted on Kobold Bomber's bomb has been changed.

- Fixed an issue where the direction of the Rune symbol would rotate instead of being fixed when tapping the equipped Rune in [Monster > Rune].

- [(Water) Mage [Soul Harvest (Passive)] - Fixed an issue where revival would not be applied for more than 2 times with soul stones in certain situations.

- Fixed an issue where unawakened ROBO would not be displayed correctly when equipped with Forgotten Ancient Language Transmogrification item.

- Fixed an issue where transmogrified Tricky and Mischievous Dice Magician would not be displayed properly when equipped with certain wing-type Transmogrification items.

- Check out the rewards for World Arena Season 23 below. 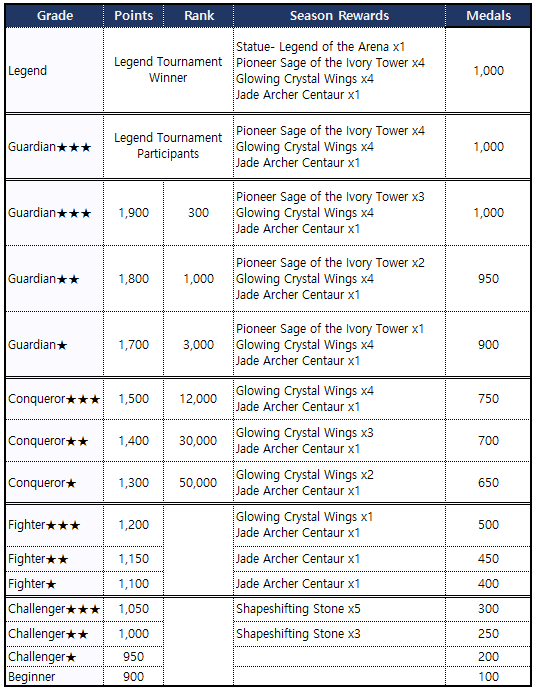