Grand opening of the Summon RPG, Summoners War: Chronicles,
that 100 million Summoners worldwide have been waiting for

My story with my Monsters, even more exciting since we're together

Orbia, Kina, and Cleaf
Three Summoners with unique roles
Create a story of your own with Monsters of five attributes!

Depart on an adventure to protect the Rahil Kingdom.
You can battle against various creatures and collect loot in every corner of the continent.

Depart on an adventure to protect the Rahil Kingdom.

This is the Rahil Order.
All Rahil Guards must climb the Trial of Ascension to prove themselves.
If you have the courage, uncover the secrets of the Kingdom in the Spires of Ascension full of twisted magic energy.

All Rahil Guards must climb the Trial of Ascension to prove themselves.

Cooperate with your allies to defeat a giant boss.
Meet a reliable ally to experience the joy of battling as a team.
Mark your name in history by conquering threats to the Rahil Kingdom and collecting their legendary loot.

Cooperate with your allies to defeat a giant boss.

Fierce battles between Summoners who want to prove their strength take place in the Arena every day.
Which Summoner and Monster will take the spotlight today?
Do you hear the roar of the Casslan villagers celebrating the birth of their new hero?
Prove yourself in the Arena if you want to become a hero!

Tefo, the king of Galagon, heard the voices of the ancients.
In order to bring the ancients into this world, he planned to open the Rift of Worlds and started a war.
However, the war ended abruptly when he was sucked into the unstable rift.


With Tefo's disappearance, Rahil Kingdom seemed to regain peace.
But one day, this precarious peace, riddled with the scars of war, and began to crumble
as rumors that Tefo had returned started to spread.

The King of Rahil is looking for a Summoner to protect the kingdom against Tefo's enormous conspiracy.

Your story of defending the kingdom as a Rahil Guard begins now.

Rahil Guards with their own missions
Listen to their stories.

Orbia graduated from the Rahil Magic School with honors.
She's an extraordinary Summoner
who can use various types of magic.
There is no doubt that she'll excel
in the Rahil Guards as well.

Kina is a Summoner with a healing ability.
She was asked by the Rahil Guards
to join them as an apprentice
due to her special healing technique.
She's the pride of the Rahil Magic School.

Cleaf is a Summoner with an exceptional ability
to protect his companions.
He has a strong will to protect the others
and is an essential talent for the Rahil Guards.

Endless adventure on the continent

Rudelin, granted with the blessing of Earth, is the greatest granary of Rahil Kingdom.
Mysterious relics are hidden in the old ruins.
An anonymous enemy appears in Rudelin to steal the relics.

After the Rift of Worlds War, the Galagons, who allied with the Rahil Kingdom, migrated to Tesca.
Although it's a barren land filled with deserts, the Galagons dream of a peaceful future here.
Glory is now only a thing of the past, but some still doubt their friendship.

Ayah, a beautiful continent made up of forests, is where the elves live.
Although the elves cut off all contact with the outside world
after making great sacrifices for studying ancient relics in the past,
they still remain kind to the visitors and like to share knowledge.

Flurence, the land of ice where alchemists and merchants risk their lives
to find Shadow Ice, a dream material comparable to the Sage's Stone.
Though the snowy mountains and blizzards can be dangerous, it's a mysterious land with much to be discovered.

The Banians are extremely talented, born-to-be inventors.
Rukurangma is the land of the Banians.
A great invention is worth a high price, so the port is always overflowing with merchants.
The sound of the iron being tempered and the pleasant laughter of the Banians never stops in Rukurangma. 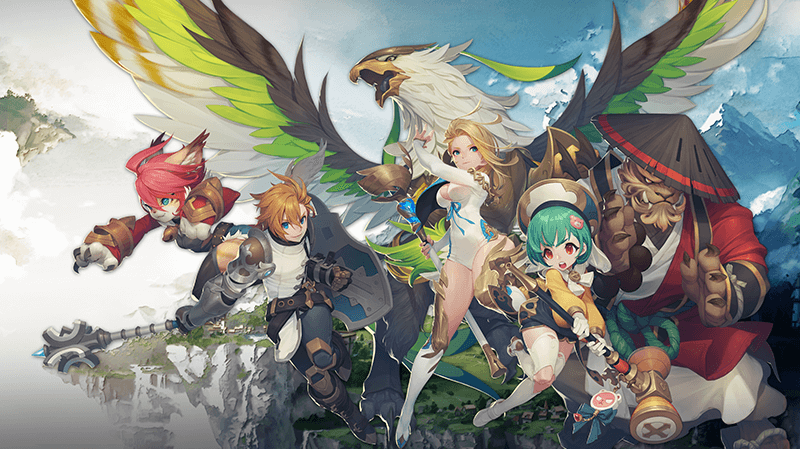 Be the first to receive the latest news on Chronicles!

Enter your date of birth.

If you are under 16 years of age, you must receive consent for the privacy policy from your parents or your legal guardian.
You will be redirected to the next page to enter the guardian's email address for the confirmation of consent.
Privacy Policy
TOP

This website is optimized for Chrome, Safari, Firefox, and the latest version of browsers above IE 11.

We recommend downloading the latest version of IE or using other browsers such as Chrome.

You can install the Hive Game Player if you access the game on PC. Enjoy Summoners War: Chronicles on PC!

For more information about the PC version, please visit our Official Forum.

- Purpose of collection and usage: Management of news subscription and sending emails
- Data collected: Email address
- Storage and usage duration: Until the subscriber requests to cancel subscription or the end of news publishing

You have the right to decline the Personal information collection and usage agreement. However, you will be limited from the subscription by declining.
For other inquiries, please contact our Customer Support by visiting https://customer.withhive.com/ask.

Go to Privacy Policy > https://terms.withhive.com/terms/policy/view/M121/T3#T3
- Purpose of collection and usage: Notice of new Com2uS services and events
- Item Collected: Email address
- Storage and usage duration of Personal information: Until withdrawal of consent
※ Please contact Customer Support if you do not wish to receive promotional emails from us.
You can still participate in the event without accepting to receive promotional emails, but you will not be eligible to receive notices of new events or their corresponding rewards.
Com2uS transfers the collected personal information overseas to ensure smooth event processing and complies with the privacy policy to safely manage the data.
- Recipient country: South Korea
- Item transferred: Email address
- Purpose and type of personal information processing: Management of news subscription and sending emails

You can't subscribe if you are under the age of 13.

※ If you are under 16 years of age, you must receive consent for the collection and usage of personal information from your parents or your legal guardian.

※Notice※ A verification email has been sent to the legal guardian's email entered.
Please verify within 24 hours to participate in the event. If the email verification is not completed, the event participation will be voided, and the collected data will also be deleted.